Bob is known for his expert croquet instruction, tournament direction and equipment consultation. He frequently travels to locations throughout North America to provide these services. Although Bob is one of the most in-demand tournament directors, he is, without a doubt, one of croquet's most gifted instructors. His specialty is in conducting group instructional clinics -- ideally four to six players per session. When instructional game play is the focus, Bob prefers a group of four so that a doubles game or two double banked singles games are possible. Bob's teaching approach is experiential in nature. When students make good decisions, they are reinforced; when they don't, students learn from being burned! Specific topics covered in instructional game play are: 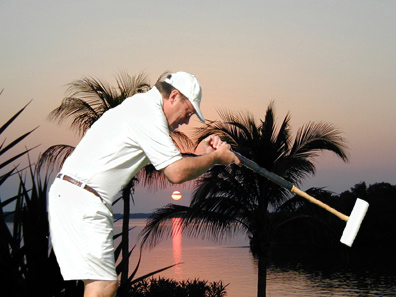 Openings
• Where to locate after making the first wicket at a particular handicap level
• When is it best not to enter the game and shoot to position at the first wicket (the Chernobyl)
Deadness rotation - who should make an offensive play and who shouldn't
Deadness theory - when to shoot to position when you are dead on your partner
Chase theory - where to locate with your live ball when you anticipate the opponent will likely take your dead partner out of position
Awareness of Opportunities - identifying when you have a break and when you don't
Peeling sequences - straight peels and back peels
Routs - intentionally croqueting or roqueting balls out of bounds to create breaks
End game tactics
• When you needn't make more wickets (aka how not to lose a game you've won)
• Defensive rout - preventing opponents from joining When dealing with a group of six, Bob can effectively teach proper shot-making giving sufficient individual attention. Specifics covered here are:
1) Proper pendulum swing
2) Using a stop-shot technique when rushing balls that are 12" or less from one another
3) Wicket shooting and roquets
4) Take-offs - thin to thick
5) The seven croquet shots
a)stop shot
b) drive shot
c) half roll
d) two-thirds roll
e) three-quarters roll
f) full roll
g) pass roll
6) Split shots - adjusting shot selection depending on the angle
7) Jump shots 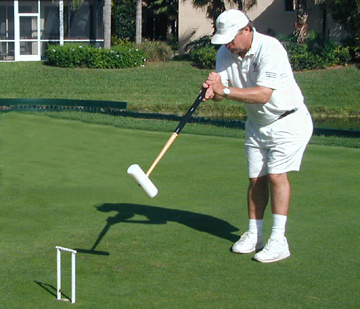 Break-Play Games
A recent addition to Bob's instruction is break-play instructional games. Here Bob pairs with three other players in a game with his sole purpose is developing a break (a system to make several wickets in a turn) for his ball and turning it over to his partner to run several wickets. He partners with each player for 30 minutes and gives retrospective advice to his adversaries along the way. This is a great way to learn what it takes to play at a championship level.

When not teaching and directing croquet, Bob is a professional recording and mastering engineer. His specialty is creating one of a kind voice/music/special occasion CDs for any occassion (birthdays, anniversaries, memorable moments, etc.). Bob also shoots and edits digital video. What is incredible is when Bob combines VIDEO and AUDIO and makes unique DVDs for such occassions. These are truly unique projects and can be delivered on DVD (video, audio, still images), CD (audio only), audio cassette (audio only), and even as an mp3 attachment (audio only) directly to your computer. Bob is a musician as well playing oboe, English horn, flute, and alto flute. He creates interesting musical backdrops with ambient sounds and can use his deep, resonant voice to narrate a special message if you'd like. If you want to give a one-of-a-kind gift, look no further. You won't be disappointed; Bob guarantees it! EMAIL BOB TO ORDER SOME GREAT AUDIO/VIDEO!!

If that's not enough, Bob does photo restoration as well. He can work miracles on damaged photos!  Check out his PHOTO RESTORATION WEBSITE