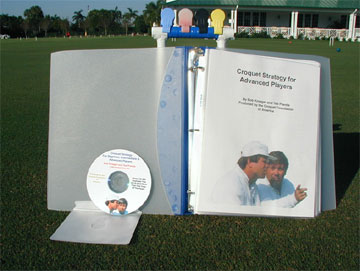 Available on CD-Rom or as Hard Copy

Three separate books are available for Beginner, Intermediate, and Advanced players. The balls are in color showing sequential diagrams with a text description of each play. There is a big emphasis on break play, deadness theory, openings, end game play, and much much more.

The official United States Croquet Association's Croquet Shot-Making Instruction Manual written by Bob may be purchased through him. 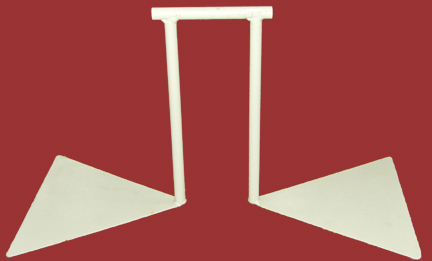 Bob and Ted's
"Know the Rules - Understanding the Rules of the USCA Six Wicket Game" on Two Audio CDs
This two Audio CD set has Bob and Ted in conversation describing the complexities of the USCA 6 Wicket Rules in a way that you'll understand them. This is a must for anyone who finds the rules confusing!!

Bob and Ted's
"Mastering Croquet Shots" (DVD)
This covers everything you need to know about croquet shots. We start with the take-off and go through the other key split shots that players must have proficiency with. There are diagrams, animations, and actual on court shots used to help you understand the elements of a successful croquet shot. This project was inspired by us noticing many players in tournaments were having significant problems executing these critical shots.

Bob and Ted's
"Break Play - What You Need to Know " (DVD)
This is the video for players who want to finally learn break-play putting an emphasis on three and four bal breaks.
The video is also ideal for players who already know breaks but want to learn more specific details. The source material
is from the "Most Wanted" video (described below) along with voice described break animations as a separate video on the DVD.

Bob and Ted's
"Staying Alive - Winning Croquet Tactics" (DVD)
This is the video for players with established handicaps of 5 and above. It deals in depth with the common problems aspiring players face - first and second wicket problems, attacking, break-play (three and four ball), comprehensive deadness rotation issues and end game tactics.

Bob and Ted's
"You Make the Call - Making the Best Play" (DVD)
This video poses thought provoking situations and gives you a chance to come up with a solution. Once you've guessed your solution, Bob and Ted give you theirs. This video will make you think and learn in the process. For all levels of play.

Bob and Ted's
"Excellent Croquet Video" (DVD)
Everything the beginning croquet player needs to get started! Bob and Ted take you right from the beginning explaining the direction of play and the use of a deadness board. They take you step by step through each of the croquet shots and finish up with some strategy. This 2 and 1/2 hour double tape video set is an absolute must for players looking to improve their technique and learn the right way to play from the beginning.

Bob and Ted's
"Most Wanted Croquet Strategy Video" (DVD)
Quite simply everything you ever wanted to know about strategy - lot's of good stuff for all levels, especially championship players and those aspiring to be championship players.To purchase these DVDs, CD's, and Books simply click on this link to the CroquetAmerica.com products page - the official United States Croquet Association Website http://www.croquetamerica.com/gear/publications/ or call the USCA at 561-478-0760.

Bob and Ted's
" Croquet ~ How To Play In The Backyard" DVD + or - R For TV and/or Data DVD For Computer
(See an online video describing these items)
Bob and Ted have created two new croquet products. One is a DVD on how to play backyard croquet. This feature video covers both shot-making and some strategy. Additionally there is a short stand alone second video on the DVD featuring a voice described animation of making several wickets in a turn (this known as 'playing a break'). It is important to note that your DVD player must have the capability of playing DVD+R or DVD-R media. In nearly all cases, the DVD will play on your computer. The second product is a data CD-R. This has a Windows Media Video file of the feature video described above (not the animation). This video is only playable on computer. Please note that MacIntosh users must have Windows Media Player installed on their computer. Along with this video there is a PDF instructional manual which includes lots of text, diagrams, and photos. Additionally there is a PDF of the USCA Official Backyard Croquet Rules on the CD-R. Both products are $20 which includes shipping to the United States where normal postal rates apply. Please contact Bob Kroeger bobkroeger@aol.com if interested in purchasing.